Helping the homeless with apps — which techie solutions are actually worth checking out? 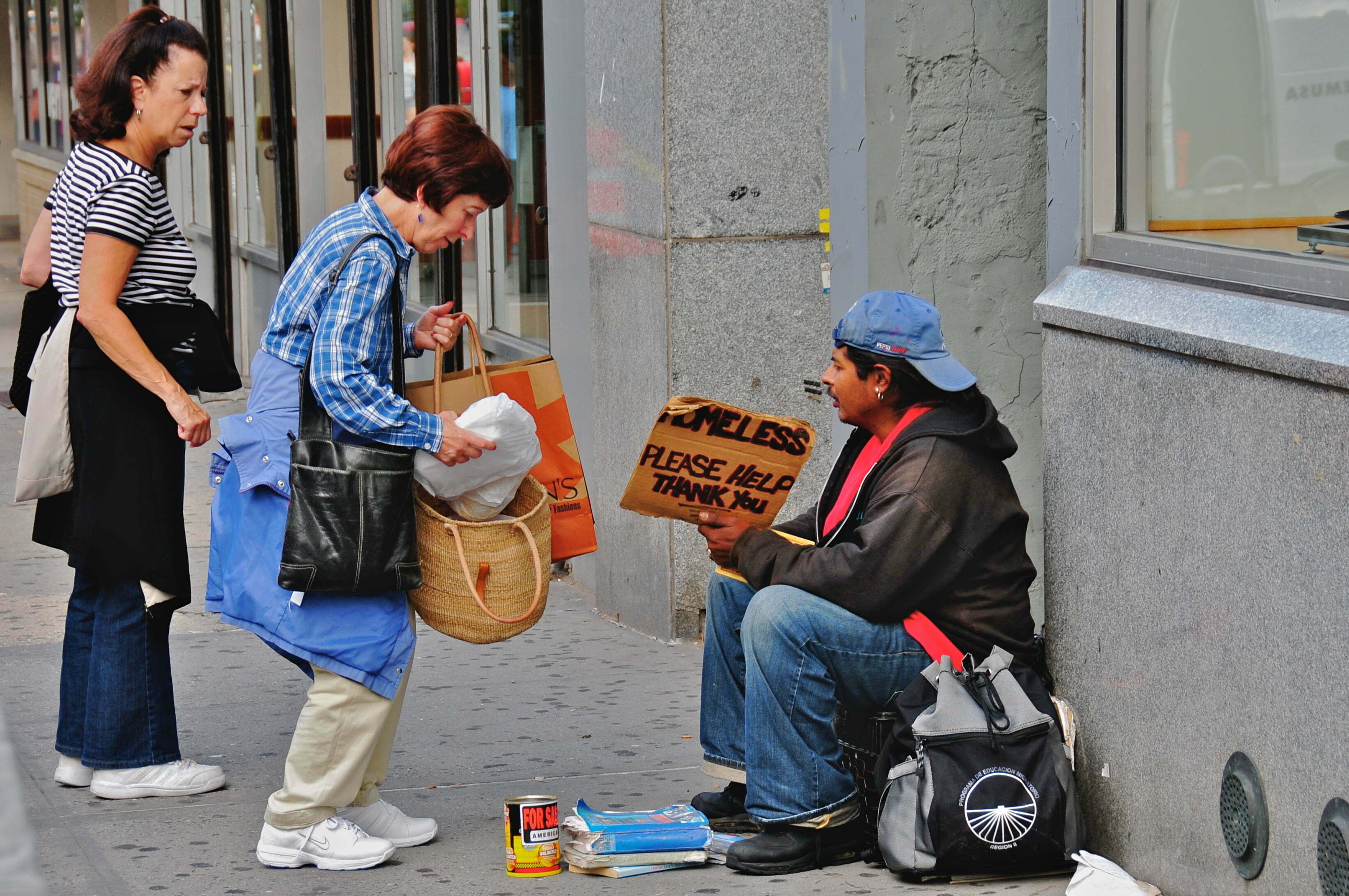 This was taken about halfway up the block on the east side of Broadway, between 79th and 80th Street. It's at the north end of the "Filene's Basement" store on the corner, and it's a place where I've often seen homeless people holding up a sign that asks for assistance...With very rare exceptions, I haven't photographed these homeless people; it seems to me that they're in a very defensive situation, and I don't want to take advantage of their situation. But something unusual was happening here: the two women (who were actually cooperating, and acting in tandem, despite the rather negative demeanor of the woman on the left) were giving several parcels of food to the young homeless man on the right.I don't know if the women were bringing food from their own kitchen, or whether they had brought it from a nearby restaurant. But it was obviously a conscious, deliberate activity, and one they had thousght about for some time...What was particularly interesting was that they didn't dwell, didn't try to have a conversation with the young man;they gave him they food they had brought, and promptly walked away. As they left, I noticed the young man peering into his bag (the one you see on the ground beside him in this picture) to get a better sense of the delicious meal these two kind women had brought him...**********************This is part of an evolving photo-project, which will probably continue throughout the summer of 2008, and perhaps beyond: a random collection of "interesting" people in a broad stretch of the Upper West Side of Manhattan -- between 72nd Street and 104th Street, especially along Broadway and Amsterdam Avenue.I don't like to intrude on people's privacy, so I normally use a telephoto lens in order to photograph them while they're still 50-100 feet away from me; but that means I have to continue focusing my attention on the people and activities half a block away, rather than on what's right in front of me.I've also learned that, in many cases, the opportunities for an interesting picture are very fleeting -- literally a matter of a couple of seconds, before the person(s) in question move on, turn away, or stop doing whatever was interesting. So I've learned to keep the camera switched on (which contradicts my traditional urge to conserve battery power), and not worry so much about zooming in for a perfectly-framed picture ... after all, once the digital image is uploaded to my computer, it's pretty trivial to crop out the parts unrelated to the main subject.For the most part, I've deliberately avoided photographing bums, drunks, drunks, and crazy people. There are a few of them around, and they would certainly create some dramatic pictures; but they generally don't want to be photographed, and I don't want to feel like I'm taking advantage of them. I'm still looking for opportunities to take some "sympathetic" pictures of such people, which might inspire others to reach out and help them. We'll see how it goes ...The only other thing I've noticed, thus far, is that while there are lots of interesting people to photograph, there are far, far, *far* more people who are *not* so interesting. They're probably fine people, and they might even be more interesting than the ones I've photographed ... but there was just nothing memorable about them.

The idea of apps for the homeless sounds… interesting. It seems well-intentioned but with a hint of tone-deafness built-in. But as we looked into it a bit further, there’s a lot of variation within this space. There are apps that people can download themselves to locate a shelter, others that allow people to donate directly to specific people, and some that creep into an invasive space.

According to a 2011 study published in the Journal of Urban Health, 62 percent of homeless youth have a cell phone. And, today, that number is likely much higher.

With that in mind, it’s no wonder there is a whole crop of apps designed to help the homeless — some offering a direct line of support from donors to the person in need. Apps run the gamut from a gamified giving experience to city-sponsored efforts to make a difference. 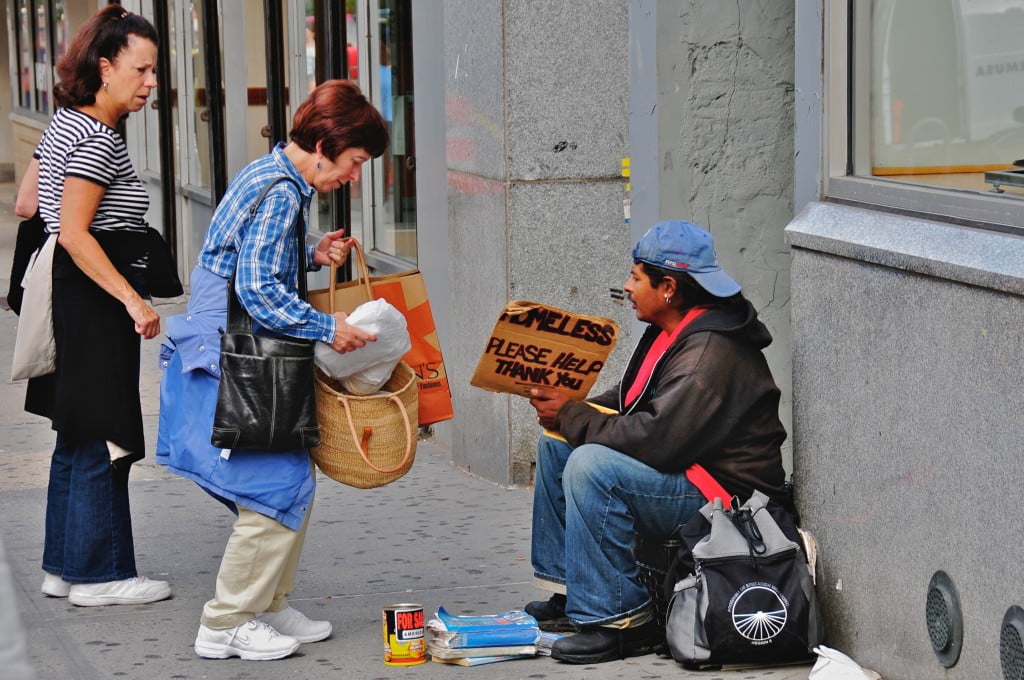 Article Summary show
What kinds of apps are out there?
Downsides

What kinds of apps are out there?

Well, for one, many charities have begun to consider what a cashless society might look like and how that might hurt our neediest members. Shelter, for example, isn’t for direct giving. Cash apps are typically linked to a bank account, and many homeless people don’t have one. The app, which has been around for a few years, has an indirect approach, a solution for those who don’t have cash or the will to talk to a homeless person.

There’s Samaritan, which is more focused on relationship-building than WeShelter. Instead, the concept is, you might walk by a homeless person, and you’ll tap a button that triggers a corporate sponsor to make a small donation to a service organization. The shelter also has a built-in 311 function, allowing people to call for help if they see someone in need. How it works is homeless people are given a Bluetooth-enabled device called a beacon, which connects to an app.

People can download the app, and when they’re close to someone with a beacon, they’ll receive a push notification, which tells them a bit about the person’s backstory and prompts them to donate by pushing a button. Beacon holders must meet certain conditions to keep their status. Funds can be spent on select items — food, shelter, personal care items — no drugs or alcohol.

They also must keep regular appointments with a counselor. As such, Samaritan probably won’t do much for those on the street due to substance abuse issues or mental illness. There’s also the issue that people with better photos or more dramatic stories fare better than those who aren’t blessed with a photogenic face. Australian app, AskIzzy presents something a little different. The idea is, homeless users can help themselves. Similar to Craigslist or Yelp, users can access a selection of nearby shelters, healthcare, and places serving food.

shelter, for example, has kind of a gamified approach to give; the founders laid out their concept by suggesting users tap a button every time they see a homeless person — which seems like it could be another way to dehumanize people who live on the street.

Some homeless people see WeShelter’s 311 functions as a way to snitch on people, as it fails to involve the person it seeks to help, which takes away some of their agency. Last year, Wired ran an article about NYC’s attempt to track every homeless person across the five boroughs. The city rolled out a new tool called StreetSmart, which the article describes as a CRM system for tracking homeless demographics.

The idea is — hundreds of outreach workers will walk around collecting data on homeless people as they check-in — documenting things like income, health, their experience with the city’s shelter system, and so on. The point is to track how many people make it into shelters or ultimately get off the street and into affordable housing.

San Francisco has rolled out something similar — the ONE System, which aggregates data about counseling, health, and shelter history. This data once spanned 15+ databases from several different agencies — so there wasn’t a centralized center for information. Salt Lake City has been doing this since 2015 — and has reduced its homeless population by 91%. Where homeless people might resist the idea of being registered to a database, the goal of these city-run applications is to get people to access services and, ideally, permanent housing.

Web Design Software – What Is It, and Why Do I Need It?